No cell-phone reception in this area. Or in the village above. All the while host families and on-looking locals, have been greeting us with a head bow and blessing, Namaste, smiling graciously and showing concern about our health and welfare.

Forgetting to ask what time breakfast was, when a bell rang at 7 a.m. Donna and Lin headed down the narrow, worrisome steps. Nope. The bell might have been for morning prayers. Back up the stairs. Breakfast was served around 8-ish.

Beforehand Amrit and Kate instructed us that it’s considered rude to not finish food placed on one’s plate; whereas, it is proper to ask for more. Lin found the portions unusually large and soon learned to ask for half portions throughout the journey.

The first day we were served hard-boiled eggs and large glasses of fresh water buffalo milk. Lin is slightly lactose intolerance, but never mind. Our aama was quick and Donna and Lin were served up seconds of fry bread before we could tell our aama we couldn’t possibly eat anything more. Tomorrow we must be quicker with our sign language or a shake of the head. For now Lin sneaked her second helping of fry bread into her pants pocket. Donna tucked hers inside her bra.

A bit later team members gathered at the centrally located host family home. We marveled at the porters, who carried the medicines up the steep hillside. The supplies were dumped on the patio. The sorting began. Identical meds were stacked together. A count taken. Lots were equally divided for the two village camps. 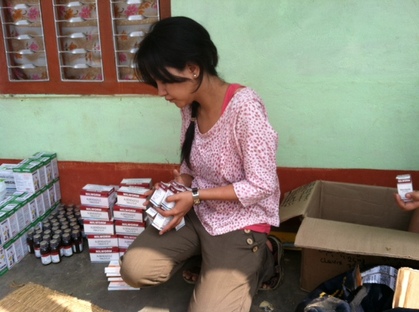 Dr. Sanjita helps sort medicines for the two camps
When Lin learned the supply of 600-plus pair of eyeglasses, she "smuggled" through customs, were left behind in either Pokhara or Waling she wondered if a bribe was in order. Instead, the team was assured these would be delivered by start of the medical camp tomorrow.

Kazi, our private chef who traveled with us, has a small restaurant in Kathmandu. We would be well-fed throughout the next four weeks. 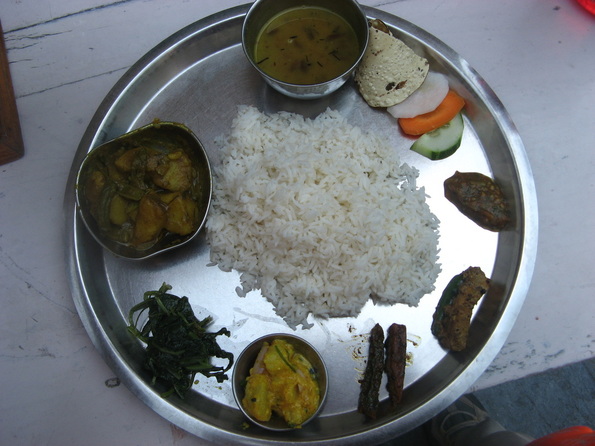 Today’s lunch: daal bhat and a lovely array of veggies. No silverware. We never thought of soupy lentils and rice as finger food. All was delicious.
Several asked for smaller portions of rice as servings were more than ample. Try eating lentils with your hands. Not only was it slippery, although the rice bound it together, Lin was the only left handed in the group and this posed a bit of an additional problem since she was still suffering pain from a broken right wrist.

In the U.S. we come to expect the highest quality standards of drinking water. Here there was no supply of mountain-stream fresh-bottled drinking water at this high village. Instead, Amrit purified the water with chlorine drops in a large copper container.It was treated out of caution and respect for the foreign's fragile digestive system.  It worked! Over the course of our four-week journey our team consumed enough to clean a swimming pool.

Setting up at Camp #1: After lunch the team trekked 20 minutes uphill and arrived at Ale Gaun village school around 2 p.m. The team found the path to be steep and slippery. Get used to it. 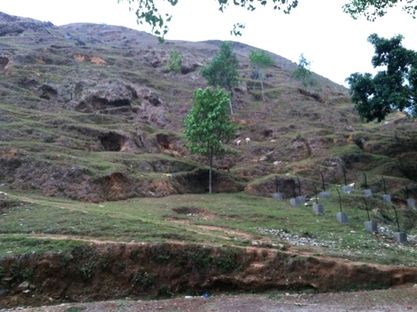 Surrounded by mountains, the school is located on the only flat spot on the hillside where goats playfully scampered.
In the distant valley below, from where the team tramped with caution the night before, lay the town of Waling amidst a jungle of trees.

Within the gated-school, dirt courtyard surprisingly was a small garden of day lilies. On a pedestal stood a bust, donated by the wife of one of the deceased and distinguished (read rich) community leaders. Within the schoolyard clothing was thrown on barbed wire perhaps to dry, or just to keep off the ground.

At each camp two banners were hung. One promoted the non-profit One World One Heart Foundation. The other promoted 'Vayodha Hospitals, Private Limited, and MedShare, Restore Vision, etc.

Do we charge for each patient? How about 25 rupees? Forty-three cents. Money raised would be given to the youth group. Or the school. Nope. The pamphlet and FM radio didn't say a thing about a fee. More importantly a large banner strung along the fence reads, “Free Clinic.”  The brief discussion asking for donations was also squelched. 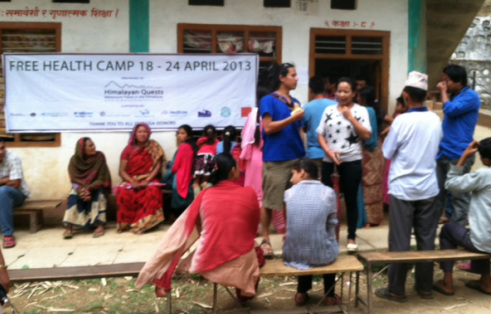 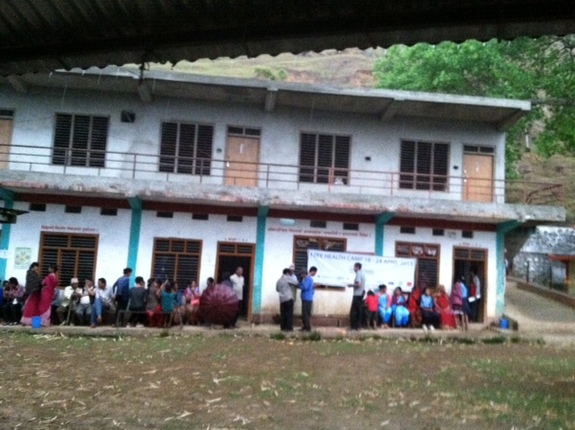 Gabde Primary School consists of two facing buildings, each with four rooms on the lower floor. Houses and buildings along the way were cinder block, or stone. Some mudded over, covered in local clay and a few painted creamy white. Hard-packed dirt floors. Pitched, corrugated tin roofs on school buildings.
Not that we expected such but neither the school nor houses had indoor toilets. Nepal as a whole has an open defecation problem, as 15-20% of the population does not have access to toilet facilities. However, at this school separate toilets with “squatty potties” are in place in outlying structures. These toilets are level-to- the-ground, in a slab of concrete. Flushing is by pouring rain-water collected in a plastic barrel, down the opening until (hopefully) no remains are seen. No toilet paper. Bring your own and a black plastic bag for disposal at the end of the day. Nor was there soap to wash hands. This felt very primitive to those who have much.

On the other hand, many villagers carry colorful cell phones. These were probably made in India or China. Not Smart Phones, but basic and a boon to the locals who otherwise had to walk the hillsides in flip-flops three hours or so just to share information.

After looking over each room, nurse Mike laid claim to one for use as the pharmacy. While medicines were unpacked Mike (the acting pharmacist) took charge of how he wanted the medicines organized. During distribution he planned to wear rubber gloves so the combination of meds would not permeate his skin (and he wouldn’t hallucinate at night.) Although at the speed he had to work that was a good-but-short-lived-idea. Instead Mike washed his hands in a bucket. “Not the most sanitary, but we do what we can do.” He tried to level the uneven tables in the pharmacy. The only material he had was flimsy poster board in his attempt to keep the display of meds from toppling over. 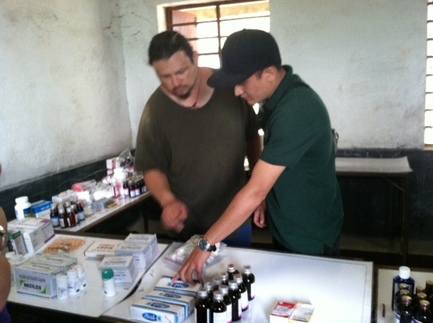 Mike and Dr. Dinesh K.C. look over the selection of medical supplies. 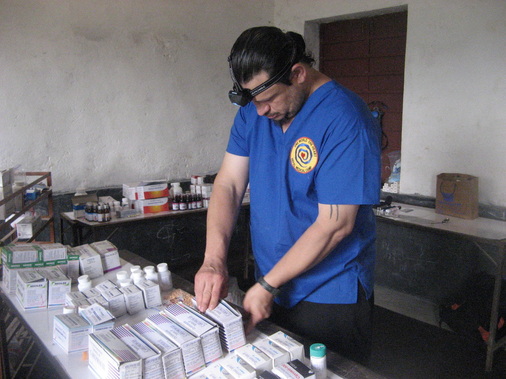 In the dimly lighted room Mike sorts medicines with the aid of a headlamp.
After the first patients arrived the next day, tables, chairs and benches continued to be shuffled several times to find ideal placement and close to the source of what little natural light there was. At best, on most days, these make-shift consultation rooms were dimly lighted. Rain and cloud cover made it even more difficult to see.

With brooms in hand both boys and girls swept the schoolyard of bamboo leaves and trash and deposited it into large hand-woven, bamboo baskets, as seen sold along the roadside from Kathmandu.

It was long past 4 p.m. and Kate was ready for a proper cup of English tea.  All was set for tomorrow and we trekked down to our village home stay for the evening.

Amrit instructed us to be gathered by 9 a.m. the next morning and bring all we would need for the day; hats, sunglasses, sunscreen, water bottle.   The team alternated each day wearing blue scrubs with the One World-One Heart emblem, and colorful Himalayan Quests tee-shirts.
Next -   Official day #1 Ale gaun
Powered by