The two medical camps gave hope to each community. The medical team was invited back next year.

At the end of the second camp a small truck arrived and carried down the remaining supplies (on the rough and rutted jeep road) to the health post at the village below. 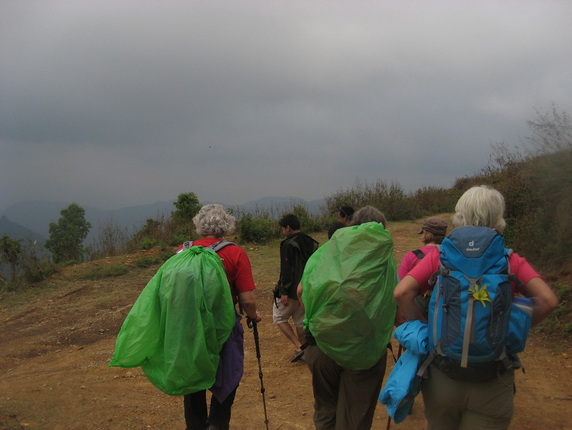 It only took three hours going downhill returning on foot to our home base village. The rain continued off and on. 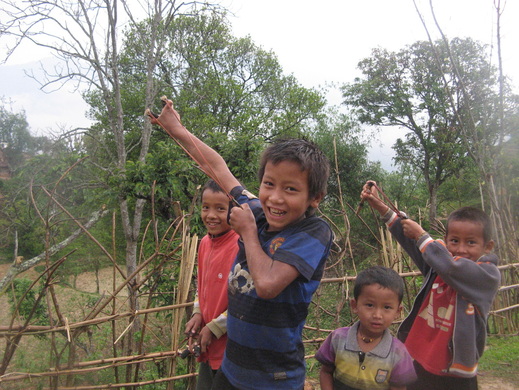 On the way back village boys are happy to demonstrate their homemade slingshots. 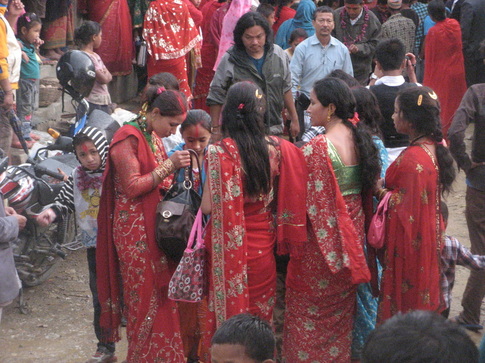 By chance a wedding was taking place in a village that we walked through. Here young women are dressed in their finest for the occasion. Red signifies purity, dignity and honor.
We learned arranged marriages still take place not only in small villages, such as this that we happen to walk through, but in Kathmandu among the professional class. In villages it is traditional that the bride is carried on the back of her brother. Here we watched as both the bride and groom are carried. 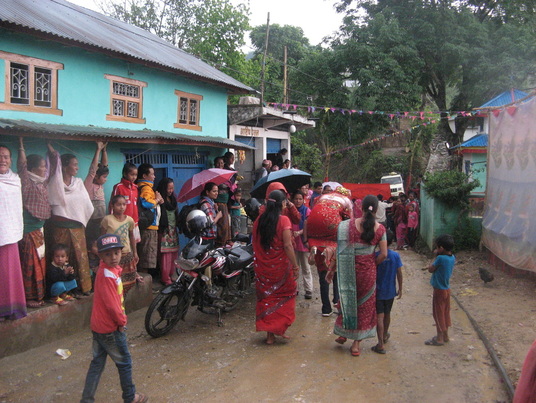 A village bride wears red in this arranged wedding. This is the first time a woman wears red. This bride was crying as she was carried by her brother as tradition dictates. She had much to be concerned about: (She was a virgin. Would her un-chosen husband be gentle? Would her mother-in-law be kind? When would she see her family again? Would she and her husband grow to love one another?) 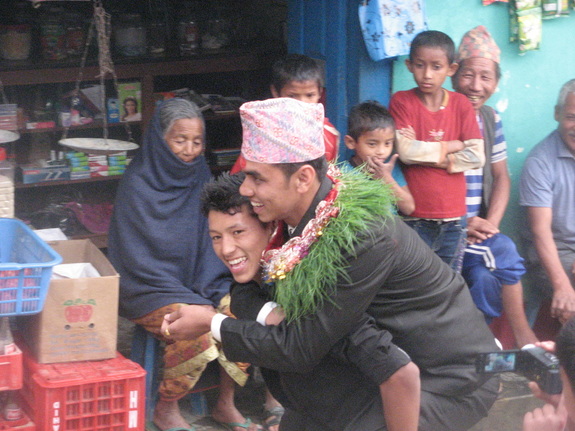 The smiling groom in this arranged wedding is also carried on the back of one in the wedding party.
Further down the trail as we are slogging through the run-off in the wooden area Dr. Safal and Kate appeared to have foot injuries. The cause of the bleeding was soon detected. Blood-sucking leeches! Within a mile or so Lin and Amrit were unsuspecting victims of the same varmints. Consuming chocolate M&Ms did not take away the remaining itch. 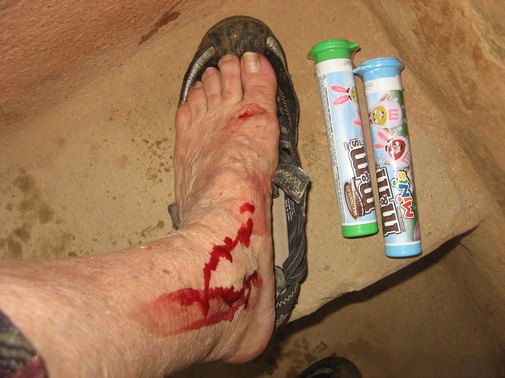 Blood oozes from leech bites.
We also saw eagles riding the thermals while again Amrit warned us to look out for leopards.

April 26 -  The next morning our entire medical team was given a royal send off by our aamas and host families. Each member of the party received a blessing of Namaste and a tikka on our foreheads.  Considered the Third Eye, this red dot provides protection against bad luck. We were also gifted with a garland of freshly strung local flowers called a maalaa, or mala. 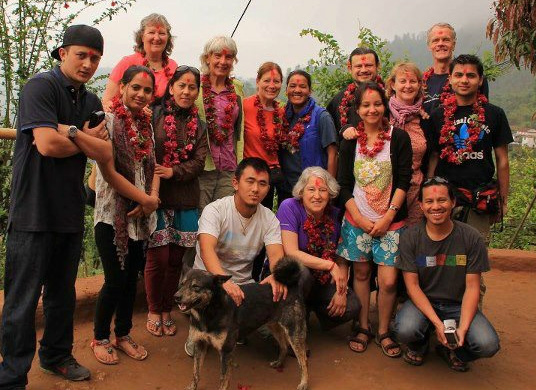 Team members each receive on their forehead a red tikka made of vermillion paste signifying a blessing from our host families.
We said our goodbyes to the Nepali medical team in Waling after walking down together from Ale Gaun. The bus was waiting to take the U.S. trekkers to Pokhara were we stayed two nights before heading with Amrit on to the Himalayan trek. See www.Himalayanquests.com

Here in Pokhara at Home Family Hotel we had all the conveniences of home; hot showers, clean white sheets, comfortable beds and pillows, regular toilets that flush, endless supply of toilet paper and the Internet.  Many stores provided for lots of shopping. There was a lakeside stroll by Lake Phawa. There were many fine restaurants. We were treated to a thank you dinner from Dr. Del at our favorite restaurant, Moondance. We liked it so much we ate a total of four meals there and always ordered a mango, yogurt-based smoothie called "lassi."

Sukey reminisced about her experiences thus far: “In [Kathmandu] the Nepalese did not get angry in traffic when someone pulled in front of them.  It was as if this was an opportunity and they took advantage of it. Good for them. Not like in the United States where someone might be rude, using the F#%&-them-tone. Most of the honking was to warn the other vehicles in passing, or making a move.

“The chanting from the monastery in the morning; the cultures getting along; the contentment of people; the healthy foods and lifestyle which rural living demanded; the willingness of the Nepali to accept us as foreigners who dressed and looked so different; the kindness of the aama at our host family and us struggling to communicate with a phrase book; and comparing my gray hair to our aama’s jet black hair." 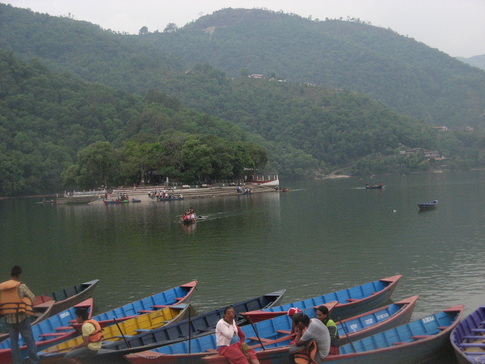 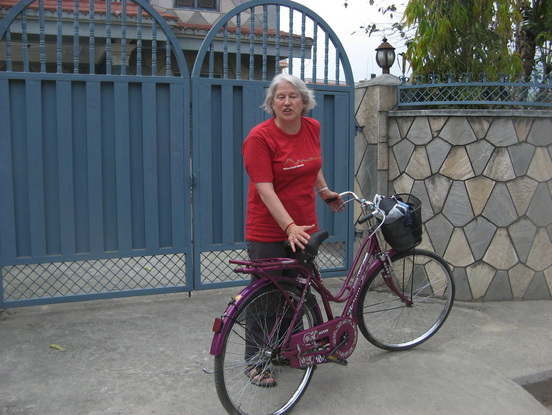 Our leader, Dr. Del, relaxes with a bicycle ride around Pokhara.
Two days later Amrit accompanied the six U.S. medical team, loaded with trekking gear,and headed on the chartered bus for Beni to begin a 10 day trek in the Himalayans. That story continues in www.LinstrekinHimalayan.XXXX - website title to come.

back to home page
Powered by