Doctors Del and Tim met Amrit at the U.S. Embassy. From there they went to the Nepal Medical Council for the required physician’s interview. Del was granted a temporary license. Tim did not need one, but they kept his application fee money anyway, (after Amrit had made many visits to arrange this legal requirement.)

Back at the Ale household, Kate prepared couscous salad for lunch. Lin was introduced to Holy Basil (tulsi) hot tea, which she will look for in the U.S.

Kate, Del and Lin constructed makeshift pill pouches from used and leftover printer paper, and a bit of glue. Kate would join the team for the health camp and looked forward to visiting with her in-laws at Ale Gaun village.

Dr. Del placed a photo on Facebook of the Health Camp banner (made in Kathmandu) thanking supporters and asking for additional donations. The cost of the medical camp was turning out to be more then we initially planned.

At the Ale household pre-ordered medical supplies arrived late at 6:30 p.m. Another delivery arrived 45 minutes later. Inventory was taken. These meds were purchased from a local, private pharmaceutical/hospital supplier. The cost of this delivery was $1,600. The supplier will take back and refund unused goods.  This is critical. Even though the team raised $5,000 the cost of the medical supplies and salaries, room and board for the Nepali providers exceeded the donations. 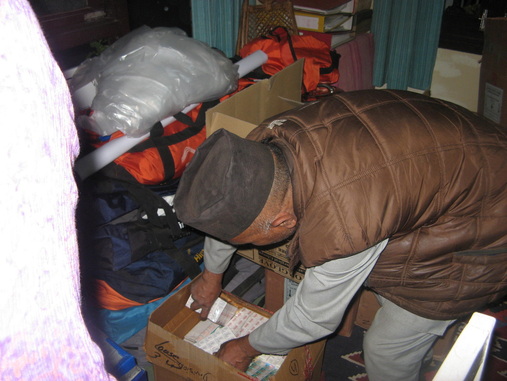 To pay for these medicines Dr. Del gave Amrit $4,500 in U.S. currency which he changed into rupees. It is illegal for a supplier to accept U.S. dollars for a business transaction. Tonight’s supplier was given a partial payment of $1,300. Dr. Del brought along with her $600+ worth of meds purchased in the U.S. Other non-expired, non-narcotic meds were donated. Some items were less expensive in the U.S. She rejected the finger pulse oximeter (detects blood oxygen levels) since she paid only $35 for these in the U.S while the Nepal supplier charged $180.

The product, ART, for filing teeth was missing from the order. The simple, but effective application of Atraumatic Restorative Treatment is ideal for remote populations. Since it would be needed, and so important, we were assured this product would be shipped by bus the next day to Waling, although the dentists are planning for more extractions then fillings.

The midwife brought supplies which we paid for. We rented four dental sets (probes, picks, scrapers), for a total of 4,000 rupees ($68.U.S.)

Purchased from E-Bay were Stethoscopes, blood pressure cuffs, otoscopes (for looking into ears), as well as fetal doptone, (an ultrasound to detect the heart beat of fetus). Afterward, this equipment was donated to the Nepali doctors and health workers in the villages.

While the U.S. medical team were unpaid volunteers, the Nepali MDs, optometrist and midwife requested the meager amount of $24.00  each for 10 days, in addition to free transportation, and room and board, for a total of $240 U.S.
Next - Leaving Kathmandu
Powered by