We awoke at 5:30 a.m. and the six in our U.S. team met Amrit and Kate in the lobby at 6:30, as well as the Nepali team of doctors and medical providers: Dinesh, Sanjita, Safal, Sadikshya, Kabita and Alija. 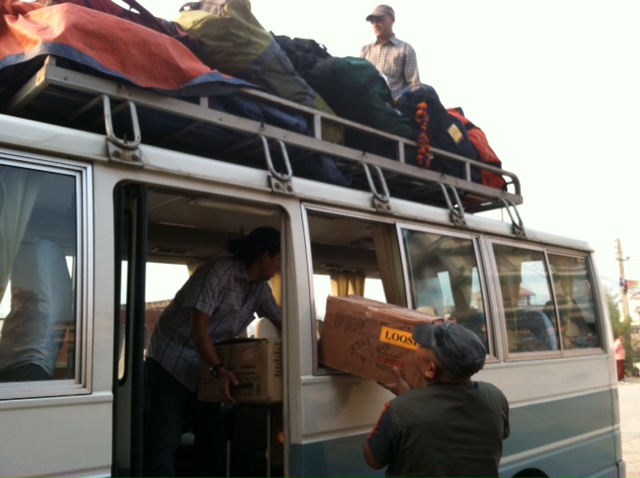 The medical supplies and our personal gear for the medical camp, as well as for the Himalayan trek, was loaded and tied down atop a private van.
The U.S and Nepali medical teams, as well as Kazi, who would be our chef for the next four weeks, departed around 8 a.m. leaving the Kathmandu Valley with a total population of over five million.

On the outskirts of the city we passed by rubble, dirt and dust amidst a tangle of electrical wires. Pollution, smoke, fog and haze have been constant since our arrival. By 10 a.m. the air still had not cleared. It’s another six weeks away before the June monsoon season, which turns everything green and clears the dustiness.

Most notable was litter. Plastic bags lying everywhere. The city provides no method of disposal. No area was tidy. Toxic rubbish burns along roadsides in this wonderfully exotic city with many sacred and ancient temples. 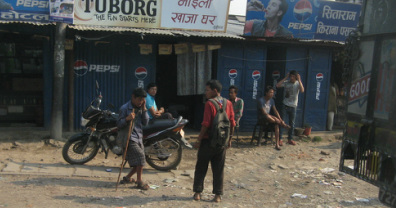 A plethora of signs abound selling SmartPhones and Pepsi, Coke and beer products. Plastic bags litter the dirt roads and streets in Kathmandu and outlying areas.
Men washing hands in the street, wore traditional jackets, vests and cap/hats (topi), no longer in style or traditional among youngsters but still seen on older men. Saris are the traditional dress for women. Some younger women and the youth wear western clothing.

According to the internet site, EastAsiaForum, “While many Asian countries including China, India and Vietnam are experiencing unprecedented economic growth, Nepal is still one of the least developed countries in the world with a per capita GDP of U.S. $624.00 and unemployment rate of 46 percent.”

Gawking out the bus windows we caught our first glimpses of a porter; those slight men of short stature, who could carry up to 120 pounds of weight on their back. Using a head strap to hold everything in place one duffel bag is loaded on a porter’s back, then a second duffel on top of first. 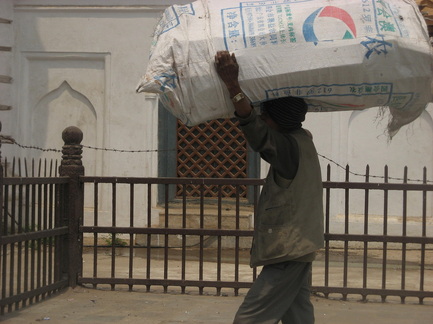 This porter in Kathmandu carries a bundle directly atop his head. 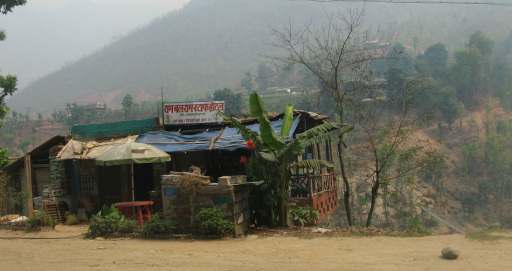 Red hibiscus add a cheery note to the roadside and bananas trees offer a tropical feel. Bamboo poles 20-foot long, used for building, were stacked high along the road. 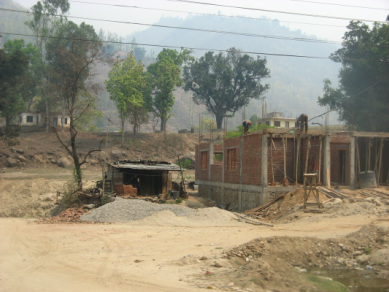 Houses, terraced up the hillside, were usually three stories high. The top floor usually stood unfinished with rebar in place until homeowner-families can get more money. 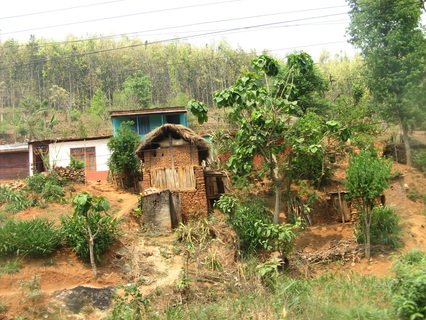 Along the highway were multi-color houses in shades of yellow, green, coral, blue, hot pink and turquoise. 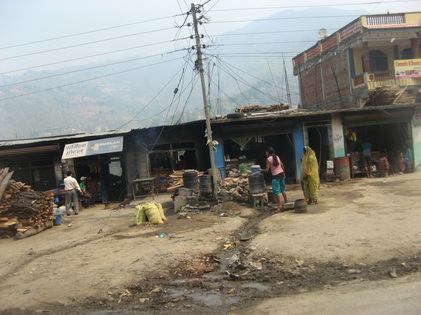 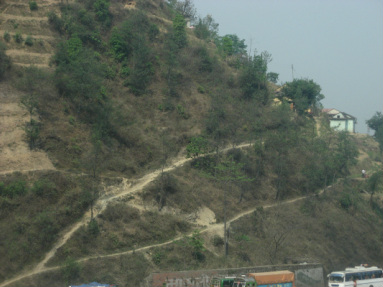 As the van steadily climbed higher outside the city at increasingly steeper elevations on the Prithvi Highway the now foggy terrain showed foot paths carved into mountainsides
Deep river gorges are spectacular. Water is the color of milky turquoise in places. Water is plentiful here. A hydroelectric power plant exports power to India and then Nepal buys it back at an increased cost. The country is the second richest in water resources after Brazil.

As a side note: For those who don’t believe in global warming and climate change consider declining glaciers. One can see the black areas on mountains which used to be covered in snow.

Now it’s the dry season, but continuing on we see many flooded paddy fields next to humble homes. A half- submerged farmer and his team of water buffalo, planted seedlings in a flooded green paddy field. Several boys squat along the bank winnowing grains of rice. 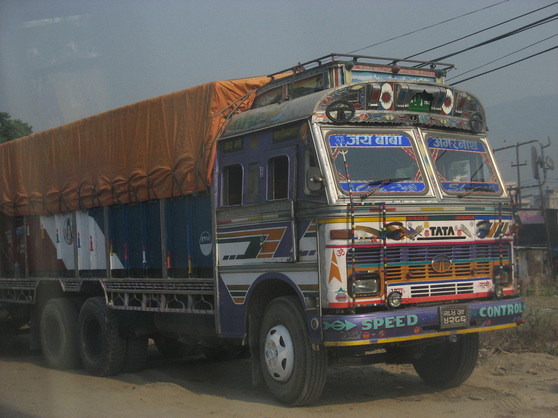 This highway is the main artery for heavy trucks which tend to be colorfully painted. Some trucks have pom-poms hanging off side mirrors. Taxis and other modes of public transportation often have talisman with protective powers hanging on the rear view mirror to ward off ghosts in the guise of an enchantress. This femme fatale hunts for young men on highways and seduces a lone traveler to accompany her.
Public buses are packed and perhaps with twice as many passengers as they can safely carry. Sometimes passengers sit on the rooftop of the bus.

It’s not unusual for buses to pass with barely a foot to spare between. Several hours outside of Kathmandu on the road to Pokhara, we passed an on-coming bus that had been edged over and nearly went off the steep drop-off. A short beep of the horn is the signal that a vehicle is coming around a blind corner. It’s a miracle we didn’t see more accidents
There are no lights on this congested road. Buses and travelers like to arrive in the daylight hours and we can see why. Accidents can easily happen. There’s talk of our group flying back to Kathmandu from Pokhara at the end of the trek. 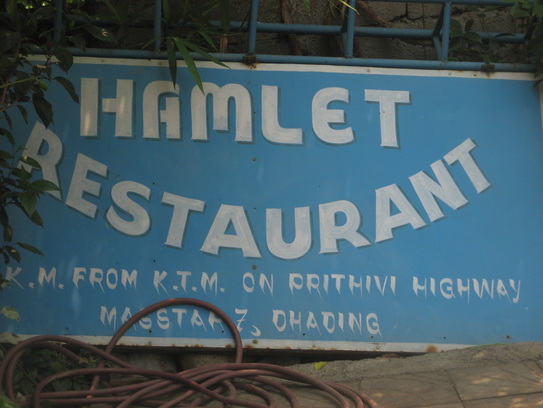 In a lovely setting and late breakfast stop, at the Hamlet Restaurant, featured a buffet of fried vegetables with a name that sounds like Pokhara, noodles and kale with spicy peppers, chickpeas in sauce, French-fried potatoes, and spicy green hot sauce. Each meal came with Nepali black tea with milk and cardamom spice.
A stop at this restaurant is the first of many experiences for several on the team using ‘squatty potties. Level-to-ground porcelain toilets submerged into a concrete slab. No toilet paper. Bring your own. And bag-it.

It’s been a long bus ride that promises to be even longer. There’s a second stop mid-afternoon at a roadside café. After the meal we were offered anise seed. It’s often chewed as a breath freshener. All declined not knowing who all had their hands in the open basket before we came along.

Along this major road that parallels rural farms are numerous elevated mounds of hay straw used for cattle bedding. 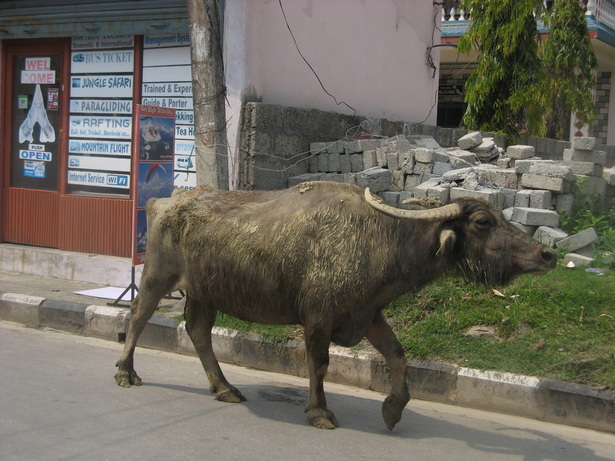 In Nepal cows are sacred. Nobody in particular looks after them. Here a water buffalo roams loose to graze in the city and others fend for themselves in the countryside. The Lord Vishnu provides.
The scenery is amazing.
Several controlled burns take place on mountain sides.
Much of the terrain is terraced for planting corn and rice.
Trees higher up look like transplanted hairs on a bald man.
A cable car runs higher up to a famous temple and pilgrimage site and cannot be seen from the road.
Women carry large baskets of clothing on their back to wash on sandbars and dry on rocks next to the river. 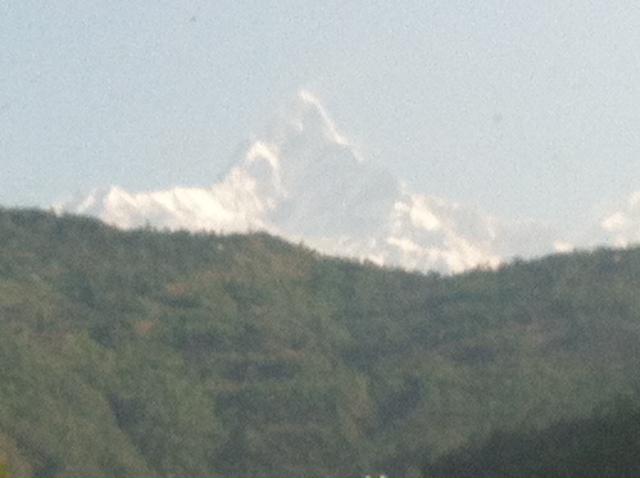 We catch a glimpse of Fishtail summit of Machapuchare and Annapurna massif.
It’s only 128 miles from Kathmandu to Pokhara, which is the land of the Magars, Amrit’s ethnic heritage of warriors/hardworking farmers. But by now we have been on the bus for well over eight hours. It’s normally a 7 to 8 hour bus ride.  But we’re not at our destination yet.

Instead we arrive at the centrally located, clean and tiny hotel for a much needed toilet break. Home Family House Hotel is owned by Mukti, a guide Dr. Del met in 2006 during a short trek in the lower Annapurna Circuit were they carried their own gear. She saw him several years later in 2012.

Arrangements have been made to leave our trekking gear here that we won’t need for another two weeks or so. Lin said, “Unfortunately, I left behind my hiking poles and boots in Pokhara thinking these would only be needed in the weeks ahead on the Himalayan trek. Boots would have been convenient for walking the slippery paths to the upper villages. Instead I'm going native and have on flip flops. What was I thinking?”

In the daylight hours, before arriving at our destination we could see the rugged, mountainous terrain ahead. Now it’s late when we reach Waling. Heavy and slow truck traffic on the road, in addition to two stops for late breakfast and late lunch caused the delay. By now we have been traveling by bus for 11 hours. It’s pouring with rain and pitch dark, not to mention the lightning and thunder. 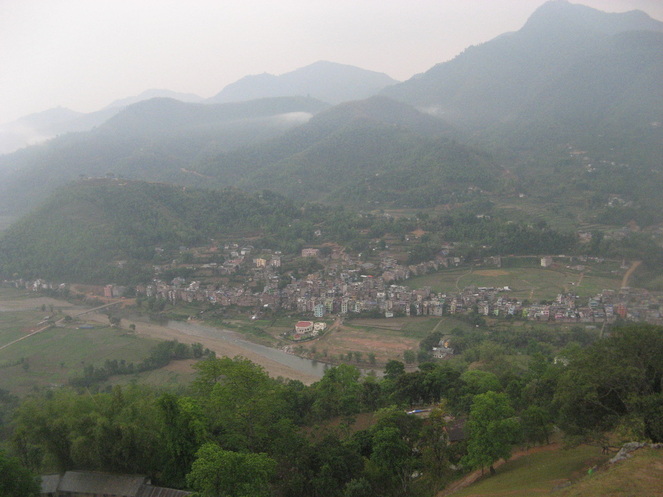 Looking down on Waling from the village high above.
Several of the team hesitate and hope we might spend the night here in Waling to wait out the storm. It was not to be. Pulling rain pants and jackets from our backpacks, we stumbled into them in the dark and started off in the rain in single file, nervously twittering short, unfinished sentences, and wondering what lies ahead.

Fortunately, in prior days Amrit instilled faith and trust. We walked to the edge of town and soon approached a metal suspension bridge with chain link sides. Were we following him to our doom? It’s probably good it was dark. And didn’t know what we were getting into. Or how high up we were from the water.  And how long the bridge would be. Or how high and steep the climb.

Lin cut the palm of her hand on a sharp edge of the chain-link metal that acted as side guard. Feeling blood run down her wrist she tried not to worry and was grateful having had a recent tetanus shot before leaving home.

Lin said, “I also left behind my new Black Diamond head lamp in Pokhara thinking it would only be needed on the Himalayan trek. We continued up a steep, rocky and muddy incline made slipperier from dropped bamboo leaves. I followed in the footsteps of Mike, the person ahead, not once taking my eyes from where his light shined. It was eerie and unnatural walking blind with no moonlight due to heavy cloud cover and rain. As consolation we were told this heavy rain storm and freaky weather was unusual for April. We were to hear this message many times throughout the journey. We trudged on.
Next - Arriving and Waking Up Ale Gaun
Powered by