How relieved we were to arrive at the home of Amrit's parents thinking this was the end of the line. But no. Kate and Amrit would stay here.

Dr. Del would also stay here. She had the privilege of sleeping in the second floor bedroom having no lock on the door. The same room, we later learn, is where Amrit’s dog was killed. The Tibetan mastiff was attacked after a leopard, which apparently stalked the dog for a few days, leaped and dragged the dog’s body into the jungle. Sweet dreams Dr. Del.

The remaining party trekked a bit higher. Donna and Lin climbed narrow, outside steps to their humble sleeping quarters. Turning sideways on the stairway, wearing a backpack, guaranteed a fall. All a bit unnerving in the daylight, much more at night. How would we maneuver these during those middle-of-the-night trips to the toilet?

Everyone of the team was wet and tired from the long bus ride which foretold an early night for all. The tidy but humble second-story room, featuring mosquito netting atop twin beds, would be home for the next few days. It's not that we are ungrateful. To be sheltered from the rain is reward enough. And this is much better than pitching our own tent. However, no cushy pillow top mattresses here. Fabric-covered cotton batting, but a few inches thick, lay atop plywood frames. Instead of fluffy down, these pillows were typically as hard as the bed itself.  Over the next three weeks we survived much the same layout, or worse. What a spoiled bunch of U.S. travelers we are. 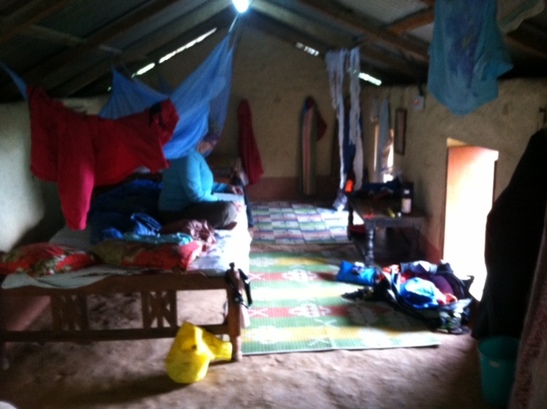 They didn't tell us we would be sleeping above a water buffalo stable.
By now Donna had shared her virus with Lin.  Beforehand, the unsuspecting Arizonan gave Donna all the cough lozenges she thought to bring for restoring saliva during the trek in the weeks ahead.

Donna asked for hot tea. Wanting much needed sleep Lin asked if it contained caffeine. Amrit said,” All tea in Nepal contains caffeine.” So much for the bedtime, non-caffeine chamomile tea Lin forgot to bring. She declined the offer. Instead, their attentive hostess/housemother (aama) brought Lin hot water (tato pani) in a thermos. Still warm by morning the remaining liquid gold was used for washing faces, feet, and other body parts, since hot bathing water would not be experienced for weeks.

In the days ahead, as often as not, we were served masala chiya - Nepali black tea with cardamom, ginger, sugar and milk. 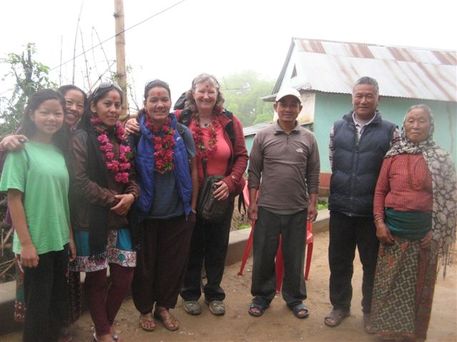 Our "aama" - house mother at far right with her family. The three in the middle wearing garlands, Kabita, Alija and Donna, are among the medical team/guests.
On Lin and Donna’s behalf Amrit conveyed to their hostess/mother- their aama - they were too tired to eat (and still full of beans… well, lentils from a late lunch.) Daal bhat is a hearty, delicious and traditionally a daily meal of lentils and rice.  Someone from the U.S., who was once interested in joining the medical camp, decided not to because she didn't like lentils.  What a flimsy excuse for missing a great adventure. The oft-served laxative-like-lentils were the least of our concerns.

Morning Has Risen - Roosters crowed. We awoke early to accordion-like sounds of a harmonium (popular in Nepal) inviting us to join in the celebration of Lord Ramayana’s birthday.

We heard movement and a sound. Moo! Similar to what a cow makes. By morning Lin and Donna realized they had slept above a water buffalo stable. Sure beats leopards. As the water buffalo stomped about below we heard the ping, ping, ping of milk hitting the bucket. Our breakfast! 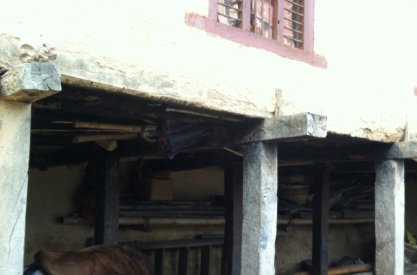 Donna and Lin's sleeping quarters above this water buffalo stable.
Could that be manure? The scent lingers. We learn it’s typical for village homes to have hard-packed clay-dirt floors that are regularly washed over with a mud-and-manure-mixture. Being ammonia based it cleans and disinfects.

L'eau Perfume d' Water Buffalo lingers throughout our stay since manure from the stable is recycled into a cement cylinder, mixed with water and the resulting methane gas is used for cooking in the indoor kitchen. Otherwise, an outside fire is used for cooking.  Waste not, want not! 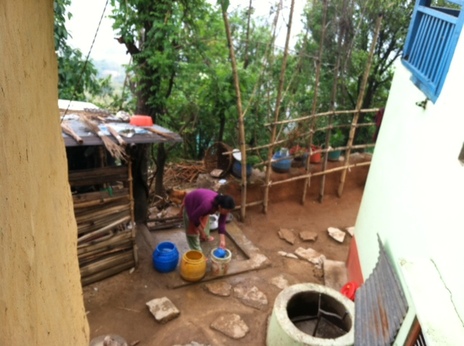 Manure is dumped into the concrete cylinder located in lower right of photo and the sludge is subsequently converted into methane for cooking.
Cold showers. Good Lord! Or Good Vishnu! This is a Hindu country. Being good sports all took the living conditions in their stride. How very fortunate we are in the U.S. With a turn of the knob we have instant hot water. Regardless, our gracious hosts appeared content with their lot in life, always kind and smiling.

Several high-bred Nepalese doctors from Kathmandu were admittedly not prepared for the living conditions of hard pack clay floors much less, outhouses with squatting required. Yet in the days ahead we would recall the enclosed squatty pottys at our home village were the cleanest of the entire trip. Don't forget to fill the blue container to flush. No toilet paper? Bring your own. Pack in. Pack out.

The blue container is also the source for scooping water for bathing. 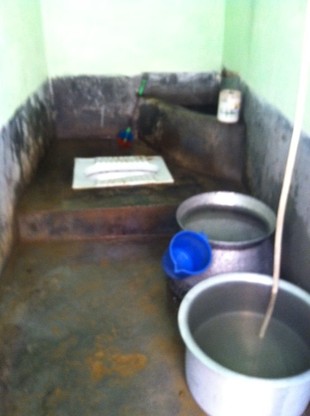 When in Nepal
Clothes need washing? Get on your knees and beat them on stones. Don’t forget to bring your own laundry soap. Forgot hand soap? Hand sanitizer is a blessing.

Joey and Karla from Taos, N.M. and founders of One World One Heart knew the ropes as they had been to Nepal many times before. They provided many helpful hints including a list of terms if we had difficulty with names. “The Nepalese will also find our names very difficult and will use some of these as terms of endearment of our host family."