Following another substantial breakfast we headed uphill around 8:30 and arrived before the 10 a.m. registration. We wondered if first-day turnout would be light or heavy since today is the second most important festival of the year.  It was suspected the second day would be busier. Instead, today was a bit chaotic.
Kate said, "The smiles, the gratitude, the joy and the craziness of registration are among my most treasured memories." 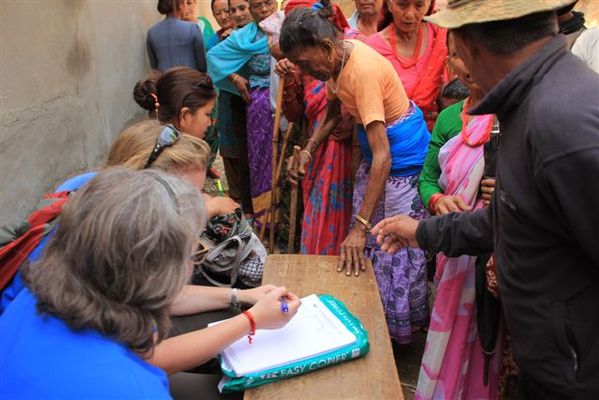 With Donna, Kate and youth volunteer quickly in place, ten patients were processed soon after arrival. Within ten minutes another 22 were in line. The numbers rapidly grew throughout the day. 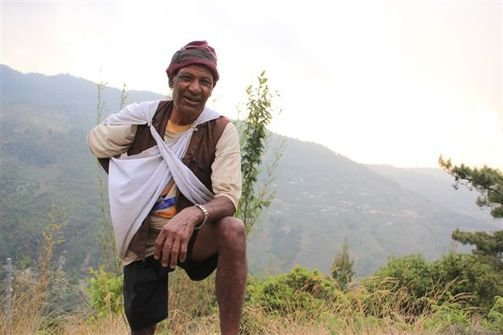 News of the U.S./Nepali medical team’s arrival was broadcast on FM radio, pamphlets and by way of an old-fashioned “screamer.” Think of a town-crier going from village-to-village without megaphone or loud speaker. (photo Amrit Ale).
Ale Gaun has never had a medical camp.  A number of patients walked a great distance with the aid of canes, or bamboo sticks.  One 87-year-old woman walked three hours to get to the health camp and then had to wait for hours to be seen. Another woman could not walk and was carried on the back of her son. 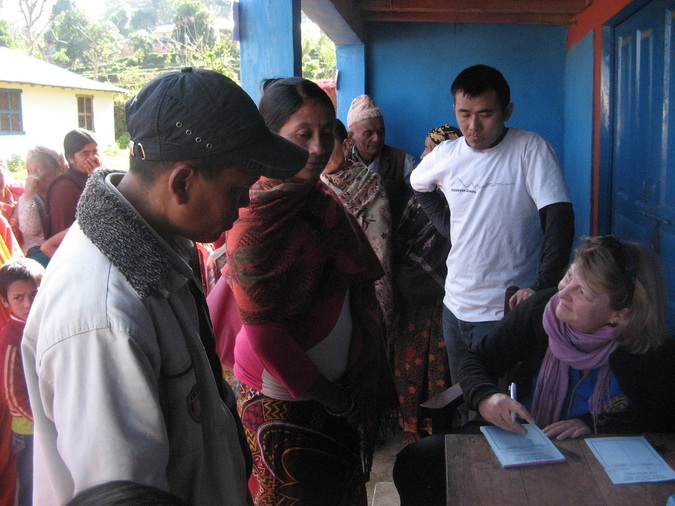 Our chef, Kazi, (wearing a white Himalayan Quest tee-shirt) stands behind Kate to offer assistance. (photo: Amrit Ale)
How in the heck do you get a passel of patients to line up in orderly fashion without giving out numbers? By 3 p.m. today the team was still discussing. Leave it to Kate, who created numbered, paper documents which corresponded to ledger numbers written in a log book. Each family member required their own Kate-issued medical form. The consult forms she created remain with each patient. Kate, Del, Lin and Donna had a hand in creating the registration-log book. Donna worked the log book, with Lin providing a half-day relief. A few patients brought doctor’s records with them. Some brought x-rays. 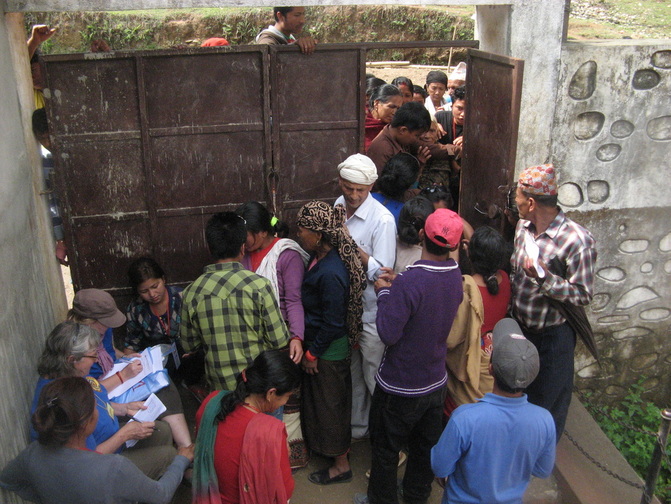 When it rained the first few patients in line were brought inside the gates where Kate and Donna sought shelter. The patients were also eager to get out of the rain and past the initial barrier. Donna said she felt claustrophobic and overwhelmed at times with the chaos and pushing crowds. "As if living in a colony of parrots," added Kate. As a side note the man in the middle wearing white is in mourning, as this is the traditional color worn during this period.
Kate said, "Having spent many an hour on local buses, in local markets [the crowding] just felt normal. Being English, and someone who loves to queue in a civilized and orderly fashion, we Brits will find a reason to queue even if there isn't one! Every now and then the crowd got to me but that was more the 'happy helpers' also shouting things in my ears so that I could barely hear my official helpers, who were trying desperately to help me spell/pronounce names and guess ages.

Names - Spelling of some local names was difficult even for Kate, who denied being fluent in Nepalese, but she seemed fluent to us. Still, she could tell the caste to which each patient belongs because the group within the caste name becomes the surname. Patients of all castes were processed during the two camps - from Untouchables to Brahmins. The caste system is still intact in Nepal, but not a rigid as in the past.

"It never failed to amuse me when asked their name. They would respond ‘what mine?’"Kate quipped. "I knew to expect many wouldn’t know their age, but it hadn’t occurred to me that so many would also not remember their name, as most Nepalis are called by nicknames. For example Kanchi (youngest girl), Kancha (youngest boy), Maila (middle son), Maili (middle daughter), saino bhai (youngest brother) etc etc etc.  In fact Amrit and I refer to his youngest brother, Naresh, as Saino Bhai and his wife as Kanchi.

Age - Overall people look older than their age. Most likely due to hard physical labor and exposure to the harsh elements. The volunteer-villager helped Kate determine age, since it is not unusual for patients to not know. When asked, some patients said they were 45. They look 85.  Instead the volunteer began asking the year of their birth. Years are expressed differently in Nepal, for example; from April 14, 2013 to April 13, 2015 the year is 2070. Kate added, "I'm totally rubbish at Nepali numbers as there is no logic to them from what I can tell." 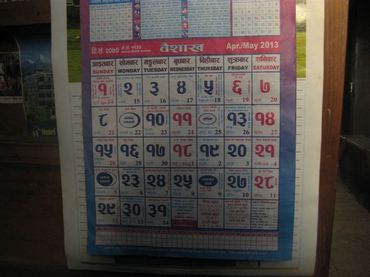 To give the reader an idea about Nepali numbers, here is a calendar with familiar numbered dates alongside those in Nepalese.
Kate recalled happily, "The amount of giggles we had when patients were trying to guess how old they were, especially the lady who told us that she was over 20 – too bloody right, she looked at least 75!  And then there were others who would state such things as ‘they were born the year the big tree fell down’ and then the cry would go out, ‘could anyone remember which tree and when’.

Weight – A scale was brought in to weigh in kilos. Obesity was not seen here. No Big Macs or SuperSize Cokes.
"The fascination everyone found in weighing themselves was also a joy to see," Kate said. "I'm guessing that most had never weighed themselves before and had no idea how much they weighed.  Unlike us westerners there was no keeping their weight a secret. Everyone wanted to know and were happy to share and there was much joking and teasing of those who registered at what was deemed to be a heavier weight (nothing compared to the average westerner!)

Consult – Patients had the option of seeing all doctors. (This changed at the second village due to the high volume of patients and lack of time).  Number/codes, designating the requested medical team, were marked on the doors of the school rooms. 1. Optometry/Eye; 2. Eyeglass dispensary;  3. Dental/Teeth;   4. Midwife;   5.  General Practice; and 6. Pharmacy. The numbers and specialties were also written in Nepalese. 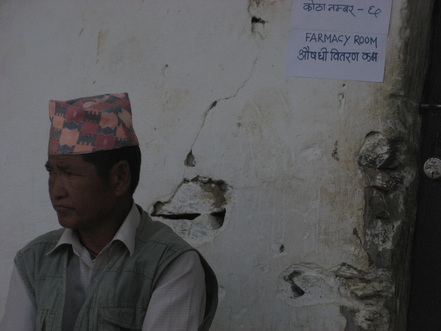 Room names and numbers were written in English, as well as in Nepali. 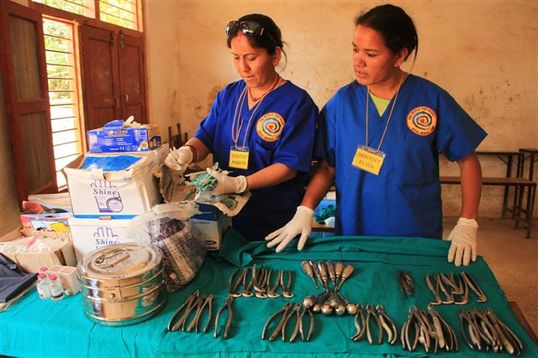 Kabita and Alija, the two Nepali dental hygienists, were unable to begin seeing patients until 11 a.m. the first day because instruments first needed to be sterilized. The door to the dental room was broken and instruments could not be left there overnight. An earlier start is planned the second day. (photo: Amrit Ale) 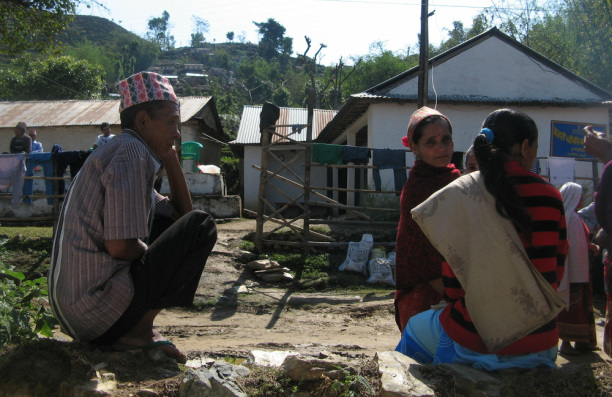 If bench space is not available it was not unusual to see men and women squatting on the ground. 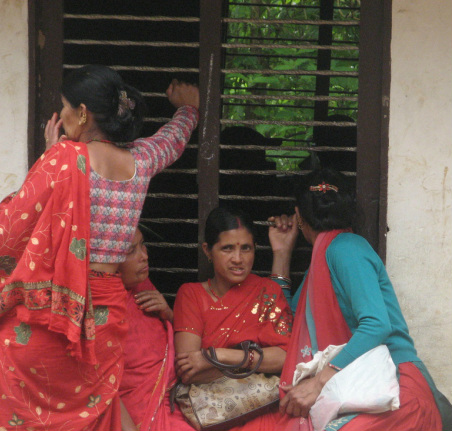 Women’s national costume is called gunyo choli. The top part of the dress is the choli - a blouse that can be half or full sleeve. At or below the waist is a wrapped garment called a guniu or sari - a long and wide piece of fabric. The same costume is also traditionally worn in India and Sri Lanka. Many were colorful and stunningly beautiful. Kate told us some are made of inexpensive cotton while others, made of silk with gold or silver thread, can cost upward into the thousands of dollars. 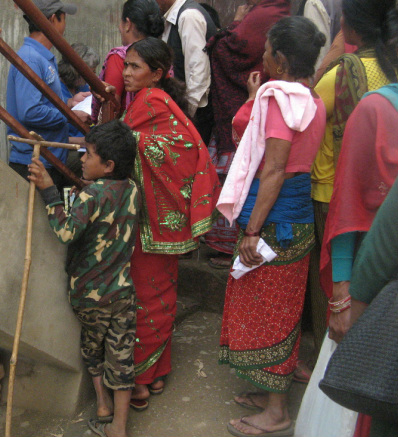 Flip-flops are standard footwear even for older people.
Seldom was cleavage exposed. It is traditionally considered immodest to show legs above the knees and bare shoulders. While it is considered low-class here a few younger girls and young women dress more western wearing stylish, tight jeans. 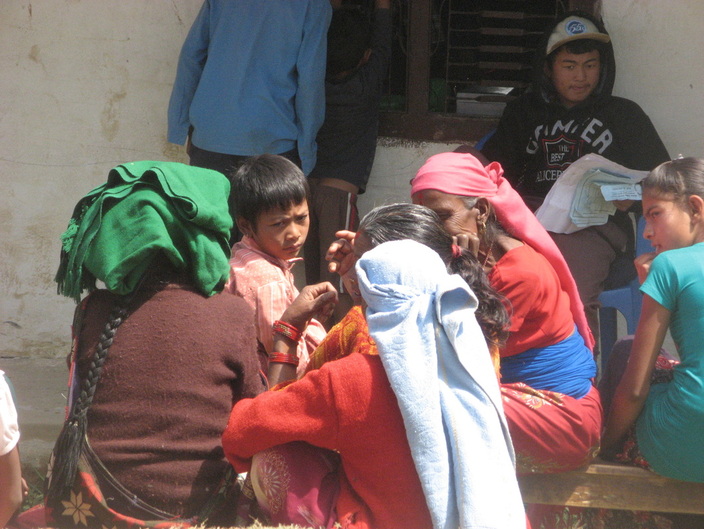 Oftentimes shawls were folded and piled flat on the head, or twisted into a turban. Note the blue fabric, called Patuka, wrapped around the woman's waist. Youth volunteer, upper right, keeps track of patients.
It was unusual to see women carrying purses. Instead, personal belongings were stuffed into folds of a long piece of fabric about four inches wide (patuka) and wrapped as a belt/pouch around their mid-section.

Aprons could signify marital status of women. (In Pokhara we saw the apron worn in the front on Tibetan women signifying they are married. Not married, if worn in the back.) 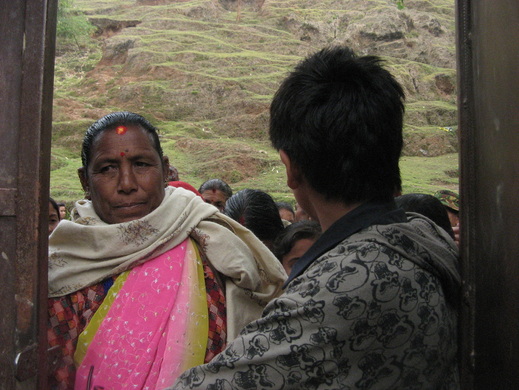 Throughout the two camps we saw Hindu women wearing the traditional bindi or tikka, a red dot between the eyebrows, signifying the Third Eye, as well as indicating their married status. Sometimes they also wear a red stripe down the middle parting in their hair, called sindoor. Oftentimes women wore pashmina-shawls to cover head and arms, which was smart since the weather was unpredictable (hot, cold and rainy). One shawl was especially beautiful – buttery-ivory iridescent of a quality that many in the U.S. would covet. 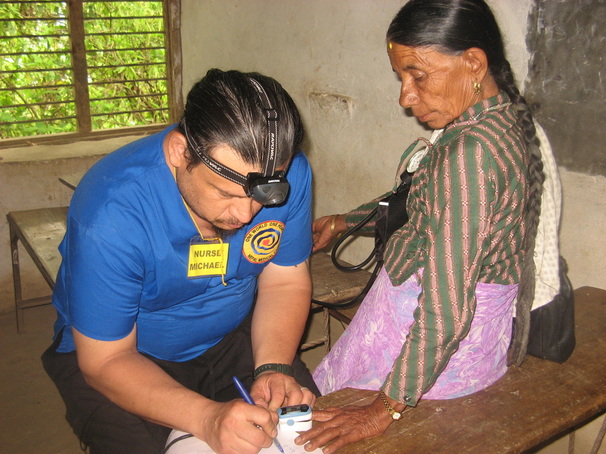 Mike takes the blood pressure of this widow wearing a yellow dot - bindi, Widows may also wear black dots. A few weeks later we saw a young woman wearing a blue dot - purely a fashion statement to match her attire. 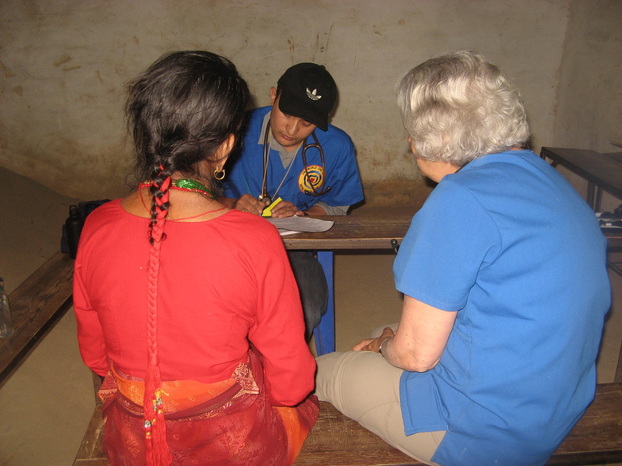 Doctors Dinesh K.C. and Del consult with this woman wearing red yarn braided into her hair. Several women on the U.S. medical team had short, gray hair in sharp contrast to most Nepalese woman who had long, thick, dark hair.
Jewelry: Typical necklaces were made of a single strand, or up to a dozen strands of small glass beads. Many older women wore nose rings dangling to the middle of their lower lip. Dr. Dinesh said, “This was the fashion in the older era and now out of style.” Middle age women often wear a large, button-size stud on the side of one nostril. The woman in the photo below has many holes in her ears. Most of the jewelry is handmade and considered property and her dowry. Wearing jewelry is auspicious. Gold earrings help the ear to hear spiritual teachings. 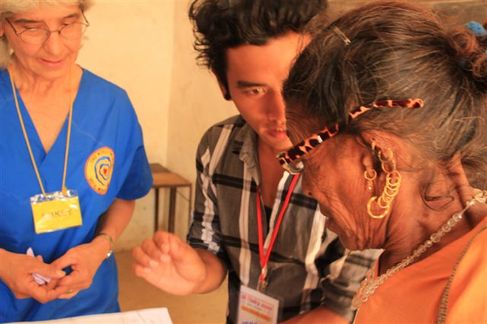 Sukey and a youth volunteer assist a patient in need of reading glasses. This Nepali woman wears eight small rings stacked from bottom-to-top on both ears. 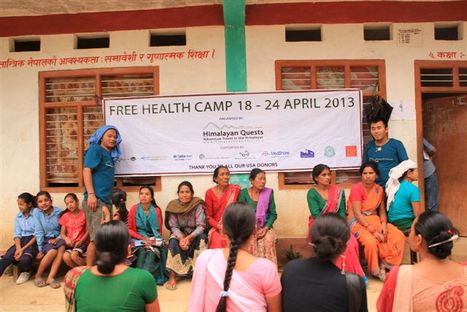 The gathering begins: Attendance at this health camp also appears to function as a social occasion. Benches were available. Women sit together. 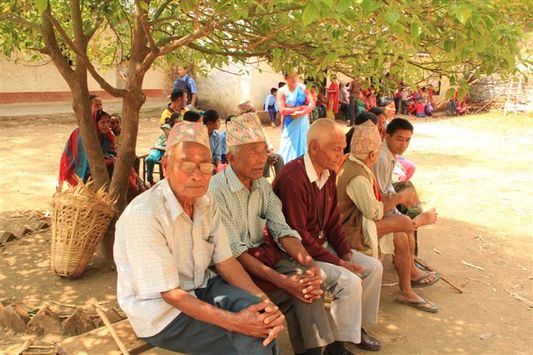 Men sit together. In this region men wear trousers and a tunic-like shirt. Others add a coat and a colorful hat or black cap, called a topi – what used to be the pride of all Nepal among the older generation.
Younger children play in the dirt while other youngsters are tolerated as they destroy anise bushes, as was typical for them to do. Young men stroll arm-in-arm.

At 5 p.m., at the end of the first day and after all patients had left, an emergency was announced. A toddler, Raj Kumar, had fallen from undetermined height, and brought in by his mother. The team quickly gathered to check for broken bones, pelvis, head and eyes.  The toddler was crying. A good sign he had not lost consciousness. We wondered what the mother would have done had the medical team not been close-by. 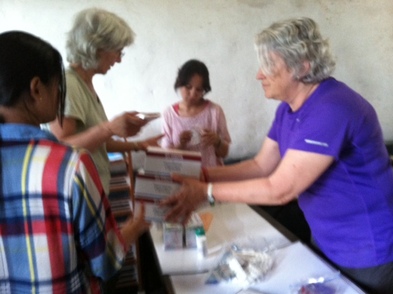 Sadikshya, Sukey, and doctors Sanjita and Del sort medicines to be locked up in the room set aside as the pharmacy.
Next  -  Day # 2 Med Camp Ale Gaun
Powered by