Chapter 3:  Leaving The U. S. for Katmandu, Nepal

Dr. Del, Donna and Mike drove from Taos, N.M. to the Albuquerque airport. Together they traveled with three additional bags filled with medical equipment and supplies just at the 50 pound limit. During the three hour layover in Dallas Dr. Del was able to get Donna and Mike (as her dependents) into the USO facility, through her retired military status as retired Captain in the Public Health Service/Indian Health Services.

After Dr. Del realized she had forgotten to bring a much needed steri-pen for sterilizing water she took a shuttle to purchase one at the Bass Pro shop near the airport. Here she thought Mike, ex-military, would have liked to browse, but knew she wouldn’t have been able to get him to leave after seeing the wildlife and outdoor equipment that he didn’t need and wouldn’t use.

After Dr. Del returned to the airport to await boarding with Donna and Mike, an airport staffer approached Del asking if she was the one who requested a wheelchair. She wasn’t sure if she looked old, or simply looked as if she was in need of aid.

At the airport in India, Mike realized, “I left my brain (my money) behind at the security checkpoint.  Almost at the boarding gate he ran back to claim his travel pouch. Before they would release it to him the security staff repeatedly insisted he was a famous World Wide Wrestling pro. "I denied any such thing and finally lied just to get them to stop and let me go so I wouldn't miss my flight.  'Yeah, that’s me,'” I said.  Autograph anyone?

The Team Has Landed - Arriving in Kathmandu at Tribhuvan International Airport Dr. Del, Donna and Mike weren't stopped by customs official and breezed through with no issue. Sukey and Dr. Tim arrived that same day.

In the meantime, Dr. Del decided not to bring her cell phone on the trip. Once in Kathmandu, Kate loaned Del an extra phone. She accidentally left it in the van overnight when she met Lin at the airport. Next day, she dropped it in a toilet. (Not a squatty potty. More about those later.) The phone dried out.  Next, Dr. Del fell in the marketplace and also outside a cyber café. She wondered where the wheelchair was now that she could have used it. “How am I going to survive the trek?”

Amrit took the five team members to view the public cremation site the next afternoon. Lin arrived later that night. That story continues.

Our group came prepared to buckle down and get to work. As anybody who has traveled abroad knows it takes considerable effort and energy these days to arrive in good spirits at their destination. Especially half way around the world.  Just getting through customs can be an ordeal.

Lin's Airport Fiasco - Saturday, April 13th -   Sometime before midnight Dr. Del and a driver left the hotel to meet Lin at the airport. Lin set her watch to what she thought was Nepalese time but noticed it was a bit off. Nepal’s time is deliberately 15 minutes off. Kate clarified the time difference. "I think it's more of a statement of independence against India. For example, Nepal is its own country and not ruled by India, who in the old days held much more sway."

The first of Lin’s bags went un-screened through customs check point. The second bag was stopped and opened. The official spotted several hundred pair of reading eyeglasses. Lin had paperwork to verify the upcoming medical camp. Nevertheless, the bag was confiscated and taken to the customs official’s office with Lin scurrying behind, still dazed from an eight hour layover in China.

Sitting behind a desk, the preoccupied customs official did not acknowledge Lin. He and another man were busily unwrapping bottles of Johnny Walker whiskey and stuffing them inside their jackets with Lin looking on. There was no attempt to disguise their misdeeds. "After much delay I was waved off and told to come back in two days to collect the eyeglasses. There would be a fine. I tried to convey their importance and difficulty of leaving without the eyeglasses, because our medical team would soon be departing the city for the villages. No doubt the officials were highly distracted by the ill-gotten goods and unmoved with my plea. They re-ordered me to wait for an undetermined amount of time.

"As time passed I worried that Dr. Del would think I had missed my flight, which is indeed what Del thought. I was allowed to leave the customs office (without the eyeglasses) and wave down Del among the masses. Although exhausted and cotton-mouthed from the ordeal I explained my dilemma to Del, who had arrived the day before. She was more clear-headed. “For once it was needed,” said Dr. Del.

Dr. Del thought to take Lin’s passport and exchanged places with her. Once at the customs official’s office the normally gentle and soft-spoken Dr. Del gave the officials a stern tongue-lashing. In a nutshell, “We have spent a lot of money, and volunteer time, coming to your country and bringing much needed eyeglasses at no cost to you, your government, or your elders, who could not otherwise afford these. Furthermore, these will help them read better. We will not sell them, but give them to your elders free of charge,” she again emphasized. 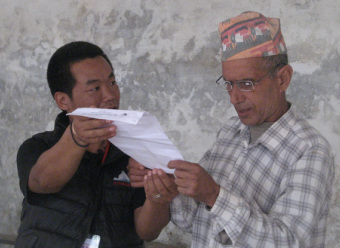 The reading glasses safely arrived and were put to good use by the elders.
"Your elders” was the stroke of genius that got the official’s attention. Nepalese are raised to respect their elders. After Dr. Del duly shamed them they waved her on to drag forward Lin’s suitcase and without a penalty charge.

The Hotel and more:  It was after midnight before the driver safely delivered the two near the Mandala Hotel. Del and Lin lugged the two heavy bags a block or so. While the clean and hospitable hotel is conveniently located (but not on a drivable street), it was within a corridor of narrow walkways. 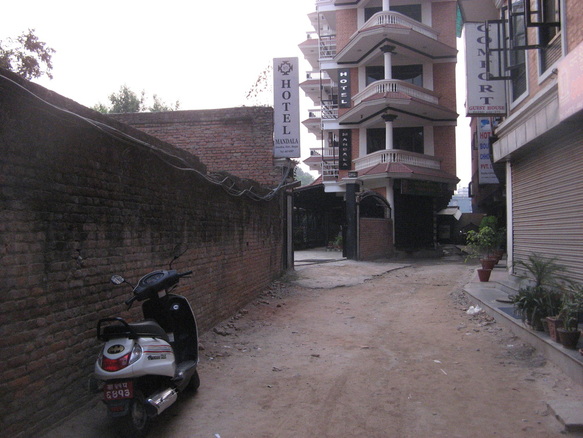 The hotel is located next to one of the 29 Buddhist monasteries in Kathmandu and behind the Stupa, a famous 5th Century landmark. 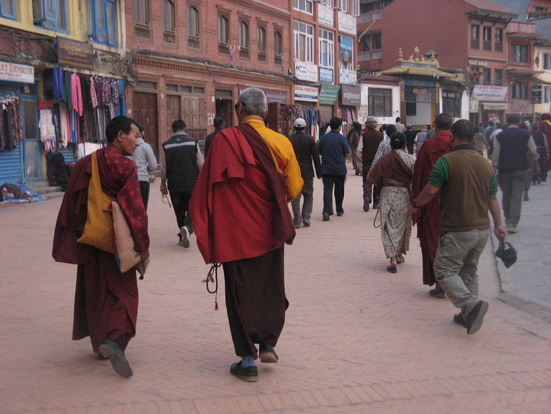 Devote Hindus and Buddhists and these maroon-clad Tibetan monks, walk clockwise around one of the largest Stupas in the world dated to the 5th century. Devotees chant mantras on their 108 prayer-bead mala. 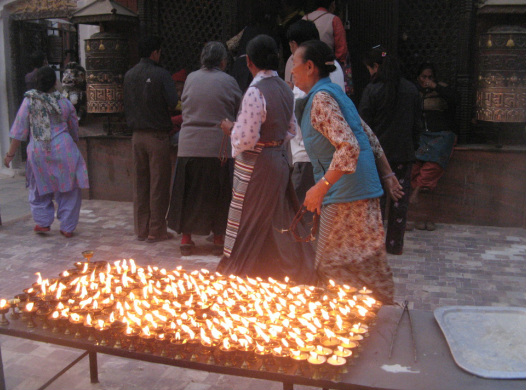 Woman carrying prayer beads (mala). Votive lights burn during the day and are spectacular at night. Prayer wheels for spinning in the background.
The Bouhdanath Stupa, also known as Boudha, located around the corner from the hotel, is one of the world’s holiest Hindu and Buddhist shrines, and the largest in all of Nepal. Restaurants in the area close sometime around 8 p.m. and since it was after hours and the area was cleared, Del and Lin walked against foot traffic going counter-clockwise around the sacred temple to reach the hotel.  During daylight hours this would have been frowned upon. They would not have violated this cultural norm, but tonight the time and weight was wearing on them.

Later we learn that just two months before our arrival an exiled Tibetan Buddhist monk set himself on fire while chanting slogans against China. Since then the Chinese have put a spy camera in a building overlooking the Stupa to monitor such protests. 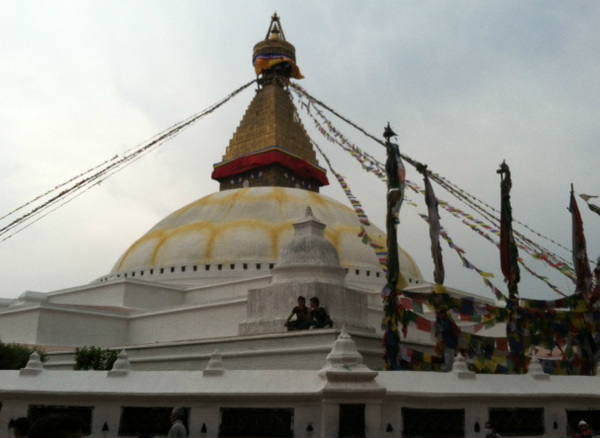 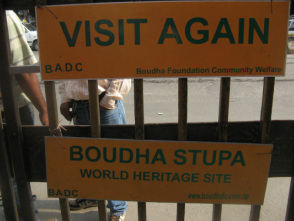 Hindu and Buddhist shrine. World Heritage Site
Upon arriving at the hotel Lin met her roommate under not the best conditions. Donna had been sick before leaving Taos. Lin awakened her with the after-midnight arrival.  Digging through a backpack and suitcase to find a much needed toothbrush and night-wear didn’t help matters either.

April 14th Sunday. Today is the Nepali New Year. Festivals are lunar.
Lin said, “I couldn’t quiet the brain and fell asleep sometime after 2 a.m. I awoke at 4:30 to dogs barking, crows hawking and song birds chirping. Just after 5 a.m. there was a cacophony of sounds beginning with a gong and soon followed by drums. I heard chanting of morning prayers (puja), and what sounded like a ram’s horn.”

Later on she saw votive candles burning day and night. Incense also burned from the crack of dawn, as a daily ritual and offering to the Gods.

The air quality was poor in this wonderfully exotic city. The primary source of the air pollution was related to the bowl-shaped valley and the great number of buses, taxis and motorbikes. Some locals wear filter masks in the streets.

Donna and Lin walked to Toast, a recommended bakery. It was closed. However, in days following the group often breakfasted there on museli, mango yogurt-based lassi, and Nepalese masala tea with milk, ginger, honey and cardamom. This became a favored location. The bakery, known to Dr. Del from prior visits to Nepal, holds non-profit status since proceeds are donated to fund a school for children. 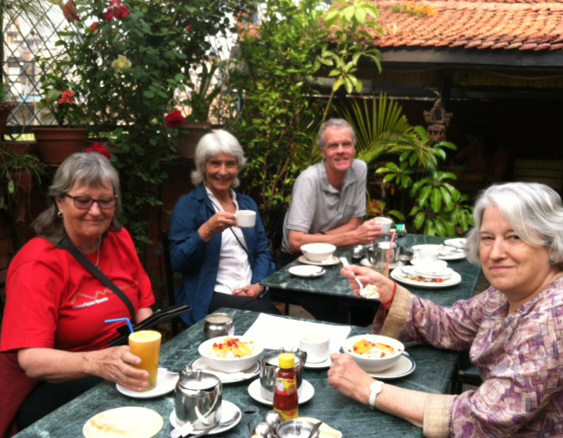 Donna, Sukey, Tim and Del in a lovely outdoor setting at Toast restaurant.
Another favored location was the Garden Restaurant. Proceeds were also donated to fund a school for children. Del and Lin shared a delicious lunch of spinach and cheese in sauce. Mike shared his order of momos:  (Tibetan meat dumplings), which we enjoyed so much that we ordered them several times more in the days ahead.

Having just come from a week-long visit in humid Cambodia, Lin’s clothes felt damp. A place to hand-wash clothes and a line for drying was found on the fifth-floor open patio. These stairs provided good practice for uphill village jaunts in the week ahead.

Next     Planning Meeting
Powered by